It is seven o’clock and the team of six, Hannes & Elzaan de Villiers, Leon & Rochelle Pheiffer from Building Hope Foundation and Mission4x4 and Shawn & Meme Duma from Crusade for Christ, stop alongisde a stream in the middle of no-where in the Eastern Cape, in the former Transkei for breakfast. We left Port Shepstone at 04:45 that morning. Everywhere we travel children of all ages, are walking to school and I cannot help but wonder whether these children have had breakfast themselves.

We meet Ps. Ndubeki, the local pastor alongside the road and stop at Ndlovumile Junior Secondary School, a small, but neat school just before 08:00. The deputy principle excitedly greets us. It is clear that they do not receive many visitors. There is no electricity and the Department of Education has erected a Zozo tank to store water. There is no grass and the children form disciplined rows on the stone filled soil.

Ps. Shawn Duma opens the school day with scripture of God’s plan of salvation and love for them. Shawn and Hannes made turns in opening at each school. Hannes’s message at the next school, Mbekwa Junior Secondary School, focused on respect and he demonstrated it by crushing a paper cup, breaking a ceramic cup and handling another cup with respect and care to symbolise disrespect and choices about respecting and treating one another.

In September 2012 Hannes and Leon assisted Shawn in distributing Bibles to children in the Eastern Cape. It was here that they became aware of the need for Bibles for children.

Rochelle Pheiffer, Leon’s wife, had a vision to raise funds for children without Bibles by children who can donate funds towards such Bibles. Kid2Kid was born and supported by Building Hope Foundation.  We partnered with Shawn Duma from Crusade for Christ to provide Bibles to children who do not have Bibles. Two pastors who were trained by CfC, minister in these schools and we support their work on ground level through this project.

So excited about their Bibles

The fundraising held at Laerskool Anton van Wouw and Laerskool Constantiapark, enabled Kid2Kid and Building Hope Foundation to purchase Bibles in Xhosa and Zulu and distribute these Bibles to 580 children in 4 schools in two provinces.

At each of the schools, the grades who received Bibles were called aside where it was handed to them. The pastors focused mainly on grades 8 and 9’s. Rochelle explained the background of the project before the Bibles were personally handed to the learners. Without exception, the children hastily opened their Bibles to read the special messages in each Bible. They eagerly shared their special message with their friends and the smiles mirrored what was happening in their hearts. 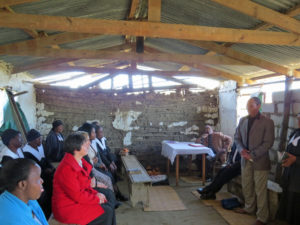 After visiting the second school, Ps Ndubeki asked us if we could pray with one of the small churches in which he ministers.

A storm wind had blown down the church walls and the congregation has been able to rebuild the walls, but a lot of work remains as funds are scarce. Twenty people give us a hearty welcome and while we prayed with them for a little while, I could hear the wind howling through the half-built walls. Just as we were about to leave, a woman puts a plastic bag with freshly baked bread in Elzaan’s hand with the words “with tea”.

I stood speachless that within the midst of the poverty in this community, they are so generous.

We left that same afternoon for Creighton in Kwa-Zulu Natal, and thereafter to Himeville where we stayed overnight.

In Creighton, we first visited Pastor Xaba’s house to map the GPS co-ordinates in order to find it the next morning. He is a warm and friendly man, but could not speak English. Shawn translated the conversations between Zulu and English.

On Friday, we visited Ginyani Secondary School, which has an exceptional view over the valley. Despite a strike we were heartely received by a teacher who stems from Pretoria. The school day is opened by Shawn and the learners sing the most exquisite

How can we help you?